Home / Modern Dermatology Press  / Fact or Fiction?: A “Base Tan” Can Protect against Sunburn 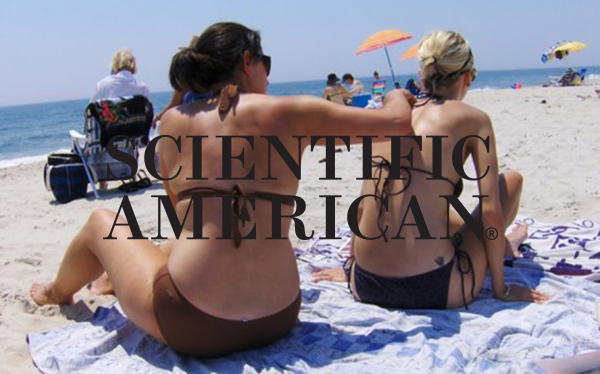 As the weather warms, many of us would prefer to look like we passed our winter days lounging by the pool instead of hunched before a computer screen or lab bench. But soaking up the rays to acquire a so-called “base tan” does not fool the sun or a tanning bed. Simply put, the benefits of being sun-kissed are not even skin-deep.

Scientists came to this conclusion after studying the tanned buttocks of dozens of volunteers. In study after study they have found that a base tan affords almost no protection against future ultraviolet exposure. In fact, it actually puts otherwise pale people at risk of developing skin cancers. A base tan only provides an SPF, or sun protection factor, of 3 or less, according to the U.S. surgeon general. For beachgoers, that means if a person would normally turn pink after 10 minutes in the sun, an SPF 2 base tan would theoretically buy her another 10 minutes—or 20 minutes in total—before she burns. That, says David Leffell, the chief of dermatologic surgery and cutaneous oncology at Yale University School of Medicine, is “completely meaningless” in terms of providing protection.

The studies that helped solidify these conclusions were relatively straightforward. Because butt cheeks do not typically get much time in the sun, a team of British scientists asked 16 young healthy adults to bare their previously unexposed posteriors to simulated sunlight for one 1998 study. The volunteers, who had varying shades of pale skin, agreed to subject their rumps to two weeks of daily tanning sessions that dosed them with ultraviolet A (UVA) and ultraviolet B (UVB) rays on par with London’s summer noonday sun. Yet even among people who tanned easily, the tanning sessions only gave them “very modest” protection, equivalent to a sunscreen with SPF 2. Other studies, including work looking at darker, olive-colored skin, came to similar conclusions: A tan affords a sun protection factor of 3 or less.

Getting a base tan from a tanning bed appears to be an even worse idea than preemptively exposing yourself to the sun. One study published this year looked at tanning from UVA light (the main staple of tanning beds) and found that the protection from future burn would not even meet an SPF 1.5 threshold. What’s worse, the body does not protect itself very effectively against the UVA rays that predominate in most tanning beds so indoor tanning can cause serious damage to your skin. Recent estimates suggest indoor tanning causes about 419,000 cases of skin cancer in the U.S. every year, which is almost double the number of cases of lung cancer linked to smoking. Still, UVA is often chosen for tanning beds because its longer wavelength penetrates deeper into the skin and is less likely to cause sunburn. The body will readily redistribute its existing melanin in response to UVA exposure—which results in immediate skin darkening—but UVB rays are better at triggering several more long-term protective mechanisms in response to cellular damage. Those include the production of more melanin, skin thickening and signaling DNA repair systems that try to correct for mutations before they are carried forward, says Heather Rogers, professor of dermatology at the University of Washington School of Medicine.

Behaviors adopted by tanned people who believe they are partially protected against the sun might compound these problems. Dermatologists say that such base tanners may engage in riskier behaviors like lying in the sun with no sunscreen or reapplying lotion less frequently. Yet no matter how hard tanners may wish, spending time in the sun or on a tanning bed will not transform a pasty person into one with darker skin, at least long-term. “You won’t change your skin type with sun exposure,” Rogers says. “It just won’t happen.”

These Are the Skin Care Products You Need in Your 30s