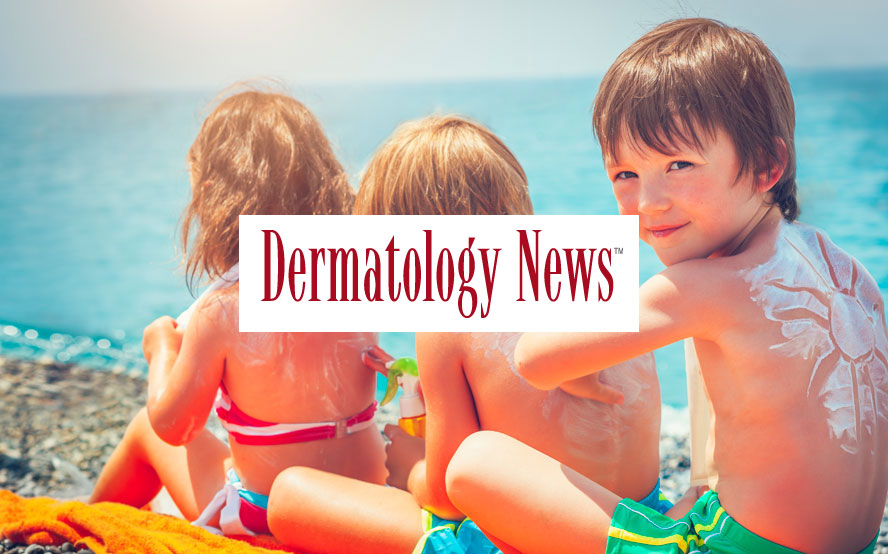 by Sharon Worcester for Dermatology News

BOSTON – Despite what some popular online media outlets report, sunscreens are safe in children and can even be used on infants under 6 months of age when sun avoidance – the best approach to protecting babies from the damaging effects of the sun – is not possible, according to Mercedes E. Gonzalez, MD.

A quick Google search reveals numerous, widely-shared articles about the dangers lurking in one’s beach bag, and while many product labels recommend asking a doctor about whether the product is safe for babies under age 6 months, that’s only because most product safety studies didn’t include that age group, Dr. Gonzalez of the University of Miami said at the American Academy of Dermatology summer meeting.

In fact, there is “nothing magical that happens” in infant skin after 6 months that makes sunscreen use safer, she said, explaining that infant skin is structurally and functionally different from adult skin, and that while gradual maturation takes place over time, thereby reducing susceptibility to percutaneous absorption of topically applied products, the risk is minimal even in babies younger than age 6 months.

Among the more commonly cited sunscreen ingredients of concern are oxybenzone, or benzonephenone-3, and nanoparticles, she noted.

However, the overall consensus based on studies of oxybenzone is that aside from causing some cases of allergic and irritant contact dermatitis, the compound is safe; no harmful cause and effect relationship with oxybenzone and systemic side effects in humans have been reported, and periodic reviews by European, Australian and U.S. safety panels all conclude that it is safe.

Numerous studies of nanoparticles – such as nanosized zinc oxide and titanium dioxide – have shown that absorption is confined to the level of stratum corneum – even when skin barrier function has been altered, she said, noting that most are coated with aluminum oxide and SiO2 to minimize contact.

However, the safety of sunscreen shouldn’t be seen as license to ignore sun-exposure recommendations; sunscreen in infants should be considered “the last layer of protection,” used only on exposed areas when adequate clothing and shade are not available, according to a 2011 American Academy of Pediatrics statement (Pediatrics. 2011 Feb. doi: 10.1542/peds.2010-3501).

Efforts should be made to keep babies in the shade when outdoors whenever possible, especially during peak sun hours. Use sun-protective clothing, including hats, sunglasses, and long-sleeved shirts, Dr. Gonzalez advised.

When sunscreen is required, a broad-spectrum water-resistant product with an SPF of more than 30 is preferable.

“But the best sunscreen is the one you and your child will use,” she said.

Mineral-based products are less irritating and thus may be a preferred option for children with atopic dermatitis, she added.

Advise parents to apply sunscreen to all areas not protected by their child’s clothing, paying particular attention to vulnerable areas, including the back of the neck, ears, and dorsal feet. Reapply before going outdoors, and then again every 2 hours, she advised.

“So the overall answer to the parents’ question, ‘Are sunscreens safe?’ … the overwhelming answer here is yes, and the weight of the evidence shows there is no proven harm from sunscreen use especially when used properly,” she said.

Provide specific guidance for pediatric sunscreen use
In the face of conflicting information about sunscreen safety and efficacy, parents with questions about sunscreen are looking for specific direction, Dr. Gonzalez said.

She said she finds it helpful to teach them about the importance of reading labels. That is, looking at the ingredients, and looking for SPF above 30, broad-spectrum coverage, and water resistance. She also recommends providing a list or images of good options, and circling the specific preferred products.

For babies, she finds stick sunscreens most useful for application.

“I generally don’t recommend sprays, but if they’re going to use a spray – and parents love sprays because they are easy to apply – I recommend the ones that have some zinc oxide in them, so that when they apply them they can see where they’re going on the skin,” Dr. Gonzalez said.

For adolescents, avoid scare tactics such as warning about skin cancer. Rather, focus on benefits of avoiding the sun, help them find a product they like by finding out why they don’t like a particular product and recommending an alternative, then following up on that when they come back in, she suggested.